Using Veritas to restore to a new hard drive

Here goes another really geeky post. I recently had problems with my 40 GB hard drive in my Dell D600 laptop. And by problems, I mean that it had the gall to go and get filled up and run out of space. How rude! So, I did what any normal person would do … NOT delete anything, but buy a bigger one. But how to get all my stuff from the old drive to the new one? And, more importantly, how to get all my applications, settings and data on the new drive without having to recreate everything from scratch?
END_OF_DOCUMENT_TOKEN_TO_BE_REPLACED

My boy on his way to Disney

I just got a call from my son Jamie. His best friend’s family had invited him to go on vacation with them to Disney World and they had just finished the first leg of the flight, landing in Dallas. I told him that he was going the wrong way (Little Rock to Dallas = away from Orlando) and he laughed. This was the first time he had flown, so I asked him how his flight was and he said, in typical 15-year-old understatement, “Uh … well … izzokay.” Then he told me that he just wanted to say g’bye before he crashed in a burning explosion over the Gulf of Mexico. I love my son, he has such a wit about him. I wonder where he gets that?

I finally found some time (I don’t know where) and fixed a few of the bugs that had been bothering me most about Zempt. The biggest one was how Zempt would mess up the internal posting date of existing blog entries when you edited them and re-published them.

It turns out that if you return the timestamp using XMLRPC in UTC time without specifying it with a “Z” at the end, WordPress assumes you are using local time … for me, that meant that when I edited a post originally published at 7 p.m., the edited version would be published with the UTC time of +0600 hours. WordPress assumed the posting date was 1 a.m. the next day … so now, Zempt correctly appends the “Z” timezone specification on posts with explicit dates. Wahoo! Plus the upload file tools seems to work pretty solidly for me.

If you want the latest version, download the installer.

We were trying to get a new plugin to work in InDesign CS today running on OS X, but it just would not load. When we logged onto the computer as a different user, the plugin would load just fine. After much flogging at it, we finally discovered that deleting the /Users/(USERNAME)/Library/Preferences/Adobe InDesign/Version 3.0/InDesign SavedData file (for the user account where it failed to load) would then allow the plugin to properly load.

Wow. You should definitely give the new Maxthon a try. It is wicked cool. It sports a completely new look, stylish and very Vista-looking. It’s fast, skinnable and so much better looking than IE7’s frame. It also runs much more stably than Maxthon 1.5x under a Windows domain member-computer. Perhaps it is finally getting to be enterprise-friendly? Here is a screen shot with the Platinum skin. Plus, this post was edited the the latest version of Zempt. More to come on that. 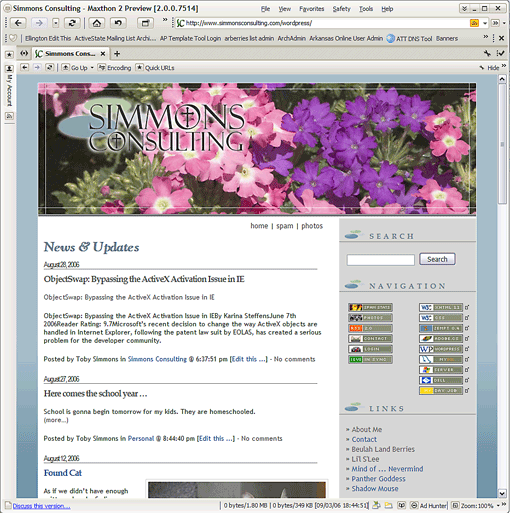