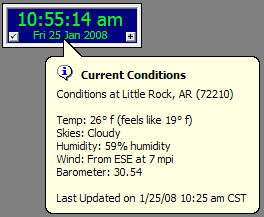 Some colleagues of mine recently got new computers and wanted to install the little desktop clock/sticky note application I wrote several years ago. I call it Clocker and have created a new installer to make it easier to deploy. It has the ability to sync your clock to an SNTP time server on the Internet.

The download is a fully functioning, no cripple-ware, application. It requires Windows 2000/XP/Vista with the latest updates. It also requires the MS XML Parser (installed by XP sp 2 or Vista automatically.) It will also update with the latest temperature and conditions based on the zip code you provide.

You can get the installer here.

Another really cool thing he has done is release his raw material and let other musicians remix it into brand new songs in his Take it and Break it contests.
END_OF_DOCUMENT_TOKEN_TO_BE_REPLACED

Upgrading PHP from 4 to 5 on IIS

I needed to make some notes when starting the process of upgrading all our IIS web servers from PHP4 to PHP5. I have found a few gotchas (which might only apply in our circumstance.)
END_OF_DOCUMENT_TOKEN_TO_BE_REPLACED