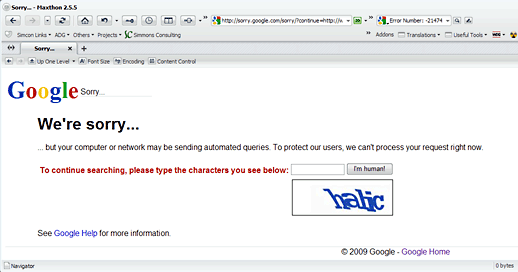 So Google thinks I’m a robot? I was doing a fair amount of searching because I had a server down and needed to fix it, but seriously?

I recently had a problem with my laptop where I couldn’t update Adobe Acrobat because something had corrupted the installation. Acrobat (and the rest of the CS apps) ran fine, but I couldn’t update because the updater would throw an error, something about “source for the installation could not be found.” After much Googling and trying several options, I realized I would have to manually uninstall the whole CS3 suite and reinstall. Ugh.

END_OF_DOCUMENT_TOKEN_TO_BE_REPLACED

A while back I was driving to work and passed the University of Arkansas at Little Rock campus. Outside was a large electronic billboard flashing different notices for students and faculty. As I approached the board, I saw a large image of a cigarette with a circle/slash appearing over it, followed by these words:

UALR campus is smoke free as of Aug. 16!

Then, a few seconds later, the very next message appeared:

Art of the Peyote Religion and the Native American Church